Tim writes about his latest bush trip collecting art, the rain and the slippery roads. Enjoy the read and the photos!

On Monday just gone, I left Alice Springs for a trip to Utopia to visit our artists, and to collect finished paintings and distribute more canvas and paints where required. It was 8.15am when I left Alice Springs behind. It was cloudy and just 23 degrees celsius! No visible rain and none expected – just perfect for this time of the year I thought. I had lots of canvas, paint, brushes on board – a lot more than I really thought that I needed. All packed into the car on the Sunday afternoon.

When I had to leave the bitumen and head up the Sandover highway (red dirt) some 50 minutes later, raindrops started pattering on the windscreen. A definite sign that the day may not be as comfortable as I had hoped! And 50 kms up the road, it became very wet and slippery. It had obviously copped quite a lot of rain the previous night. Then I came across a rolled over tradesman’s utility that had its hazard lights on. No doubt it had happened earlier that morning. A few fresh tyre marks were around it but no one in attendance. It was very badly damaged and made me become even more conscious of driving carefully! 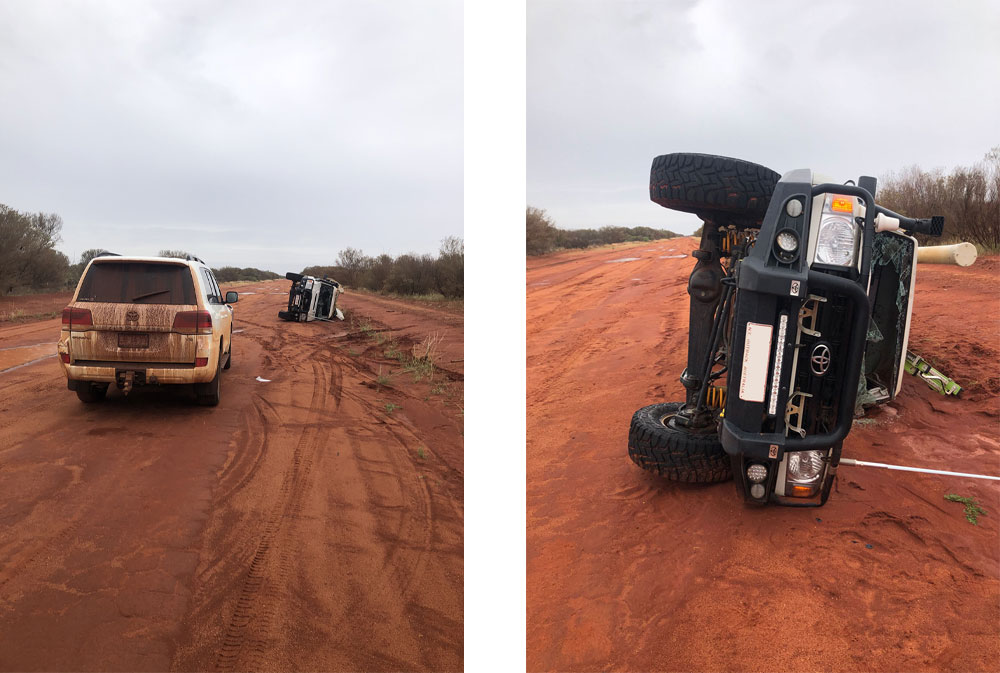 At about 11.30, I arrived at Camel Camp and was met by Elizabeth Mpetyane, Angelina Ngale, Denisa Hayes, Matthew Mpetyane and old Motorbike Paddy… They all seemed pretty happy. Elizabeth had a beautiful 180 x 120 painting finished. And I say beautiful in the context from her vision firstly, and mine secondly. They are mostly white dots, but vary in size and pattern, and sometimes mixed with off white or cream. And then she usually adds sparsely distributed red dots (sometimes a different colour). And when you look at the painting rolled out on the ground you can sort of shake your head thinking that “it’s not bad but is it my cup of tea?”. But I know that when stretched and having the red dust wiped off, the paintings become quite mesmerizing with their patterns. Not overpowering, but with a distinct uniqueness about them, especially the larger sizes, say from 120 x 90cm upwards. In reality, they look much better than they do on our website.

Angelina was her usual bubbly self and had quite a few small to medium sized canvas completed. Matthew said that he needed some more paint even though last trip I gave him enough to paint a house with!! Anyway, I gave him some more!! 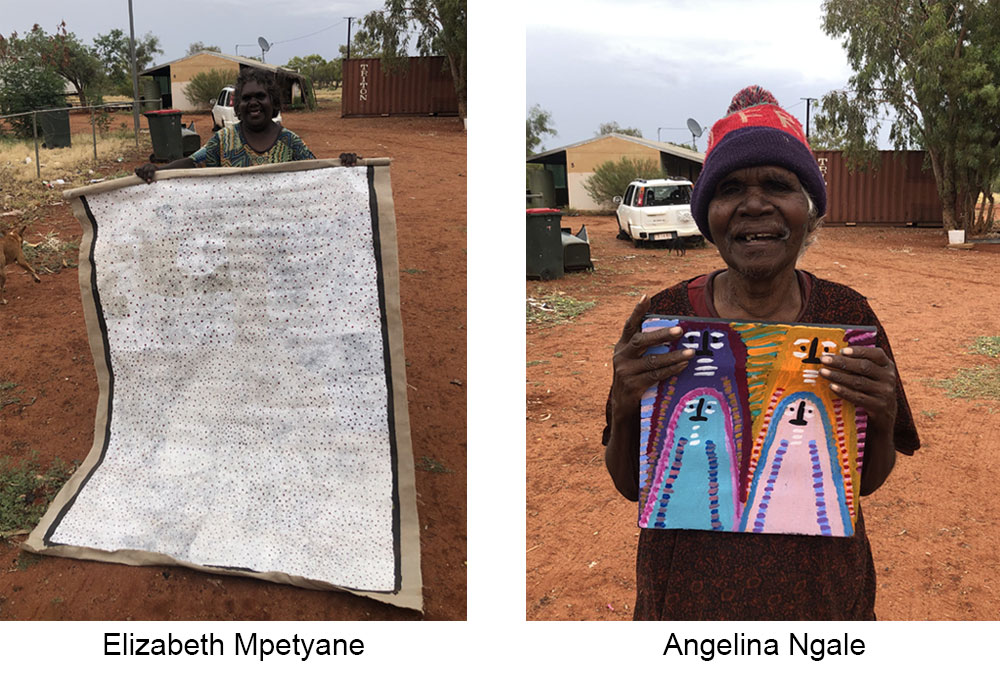 At 12.15 I left Camel Camp with the intention of going north to Atnwengerrpe and working my way back from there. A couple of artists who haven’t painted for me for years had earlier rang Denisa to message me that they wanted to catch up with me when I drove through Arlparra - but it was raining when I drove through, so they weren’t there. Then 5 kms further on it had stopped raining, and I got waved down by a group at the turnoff to Soapy Bore. It was Nicole Jones, Dorothy Jones, Alysha Jones, and Mary Lewis and some other non-artists. Mary and Dorothy had some nice, finished canvases so I paid them and gave them some more, as well as giving Alysha some too. I first met Nicole a year or two ago when she was in town. She was having a few issues, so we had a good chat about life and direction. She returned home to Soapy Bore, and I asked her how she was going. And a very happy chatty Nicole said that she was now a teacher’s aide. I asked her if she had quit cigarette smoking yet, and she proudly said that she had stopped some 6 months ago and has a secret tin where she puts all the money into that she has saved from quitting!! Is going to splash out at Christmas!! A nice little story! 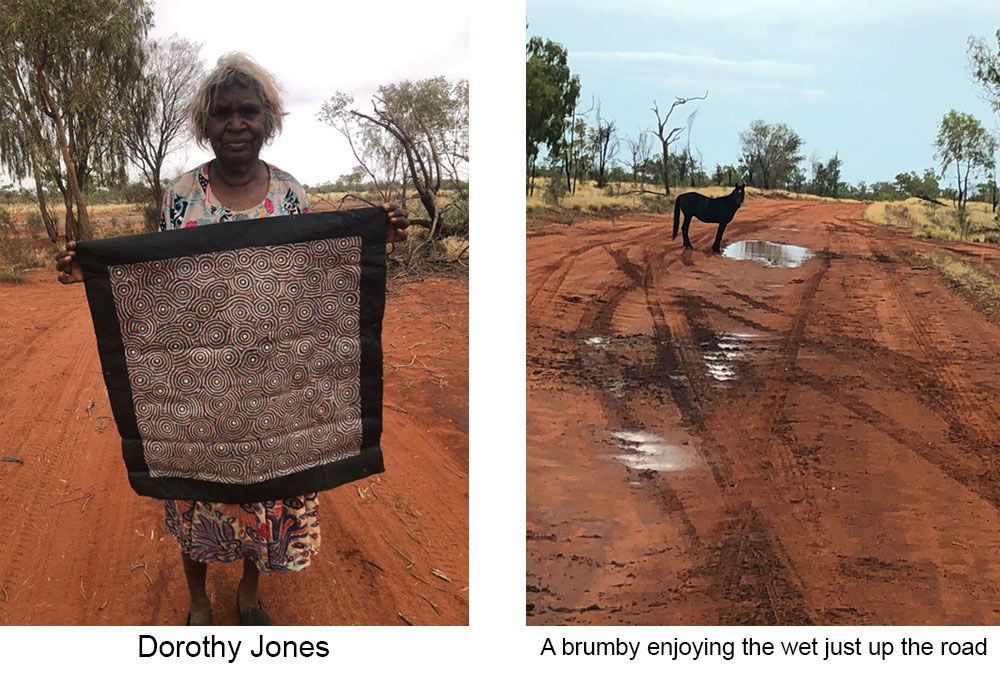 Then off to Noongi!!! Arrived there at 1.40pm! Drizzly rain, and it kept up for the 3 hours that I was there!!! I was really busy with Teresa Purla, Annie/Susan/Jessie Hunter, Lizzie Moss, Janie Morgan, Geyla/Emily/Molly Pwerle (Minnie’s sisters), Lily & Michelle Lion, Valerie Morgan (new) and Susan Philomac. It was a really productive time, and even though it was light drizzly rain, there was lots of healthy banter and chit chat.

Susan Philomac painted for us years and years and years ago and left and lived in Tennant Creek for a long time. She’s now back home and last trip out there in early November, we had a good yarn, and she was asking me what I was looking for in style/design. So, what I did, was give her about twenty 30cm x 30cm canvases with paints and asked her to do lots of different subjects and said that we’d look at the results and decide together what we reckon will be best to pursue in the short term anyway. And she did just that! There were lots of different compositions! So, we plucked a few out, and we’ll see what the future holds! She also introduced me to Valerie last trip, and we did the same with her. Because of the rain, I didn’t get Valerie’s profile details this trip, but will next time.

Also, Teresa Purla provided me with some images of old Molly doing some of her paintings, which I am grateful for.

When I finally left, I knew that I had a couple of hours of slow dirt road high-focus driving ahead of me, plus another hour on the bitumen so calculated an Alice Springs arrival at around 8pm. I decided to give Rocket range a miss this trip, because of the time and the weather, additionally I had heard that Katie Kemarre had been flown into Alice with a non-life threatening medical problem.

At 7.43pm I arrived home in Alice with a load of new paintings, not many of the fresh canvases left, and very few tubs of paint! But one very dirty motor vehicle!!!

And the trip was the easy part! Processing takes much longer – but with the good team that we have, we enjoy it.