Come with us as to Utopia and meet some of our artists as Tim Jennings collects more aboriginal art.

Last Friday (July 17th, 2020) I travelled to Utopia for the first time since February the 12th. I took with me my oldest daughter Terri and her youngest daughter Savannah, who is 11! Terri’s been out with me many times, but it was Savannah’s first time.

I wasn’t expecting to be collecting a lot of completed paintings because many of the artists had visited Alice Springs over the past weeks and had brought them in. But having said that, I was surprised at how many there were! Tomo, our long-time art manager, had been giving out new canvases, and quite a few ‘oldies’ who don’t come to town had kept theirs waiting for me.

It was a beautiful day, a nice temperature, and a slight breeze. You couldn’t ask for better weather. AND NO FLIES!!!

First stop was Camel Camp where we were met by Elizabeth Mpetyane and her brother Matthew. Elizabeth had taken canvas into town a couple of weeks ago, so didn’t have any new completed ones. Matthew had a completed 120x90cm painting. It was all different coloured dots, with no obvious pattern. Same as most of his previous ones. But they have so much character in them!!!!

Matthew lives in a little humpy near the small outstation houses. His completed canvases are usually wrinkled and folded rather than rolled, unplanned paint and dribble lines often part of the ‘composition’. His personality is a perfect match – he’s unruly in a really nice way. He talks lots in his language with a few English words thrown in, he laughs a lot… he’s really friendly and jovial. Simply put he’s a really nice bloke! OMG though – this particular painting was probably the most wrinkled and folded one that I have ever collected!! I just had to laugh and shake my head. Most people I would think would reject it, but there is no way I could do that. I have no doubt that there are plenty of people who, like me, will see the character and personality in the painting. 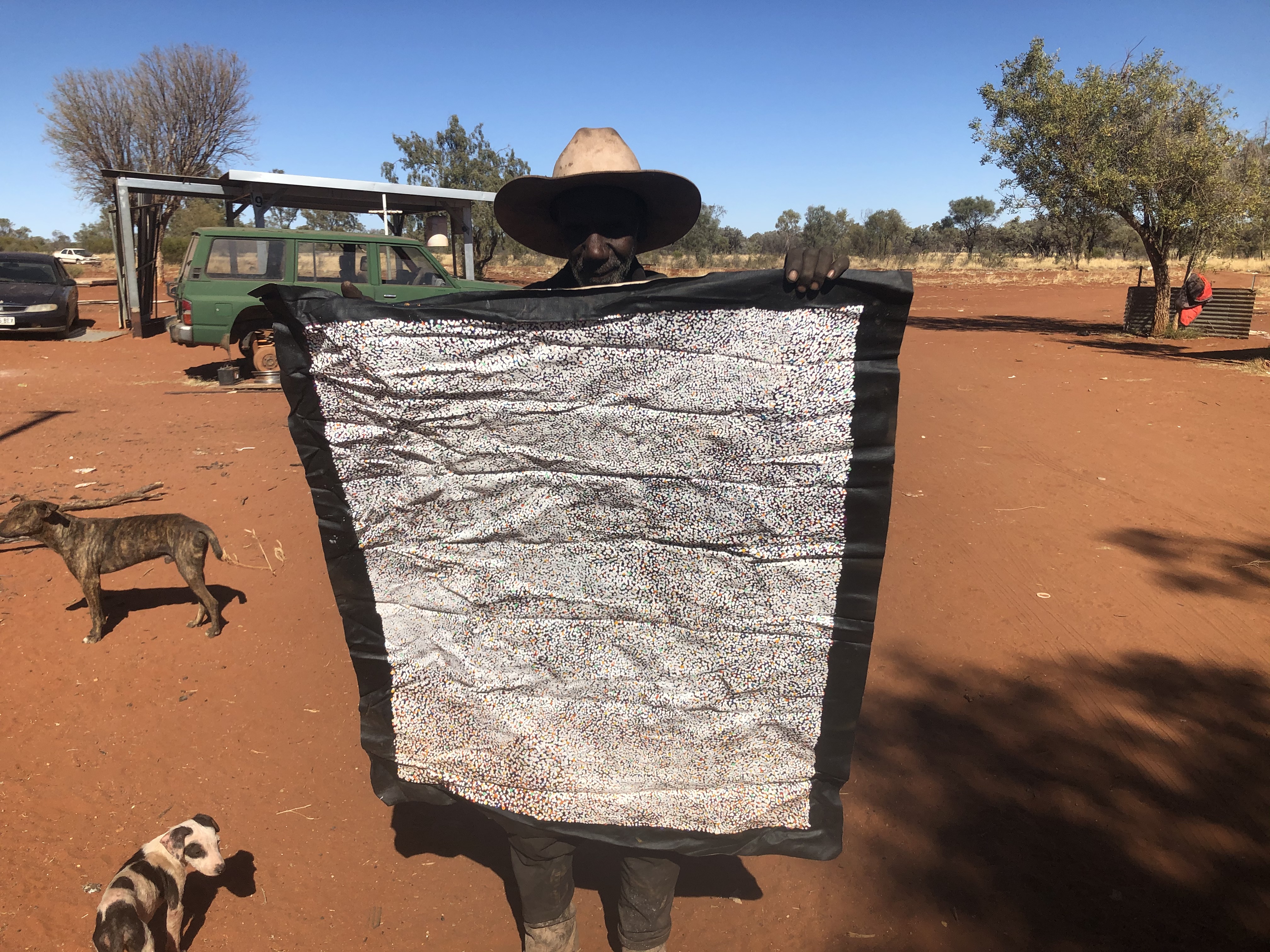 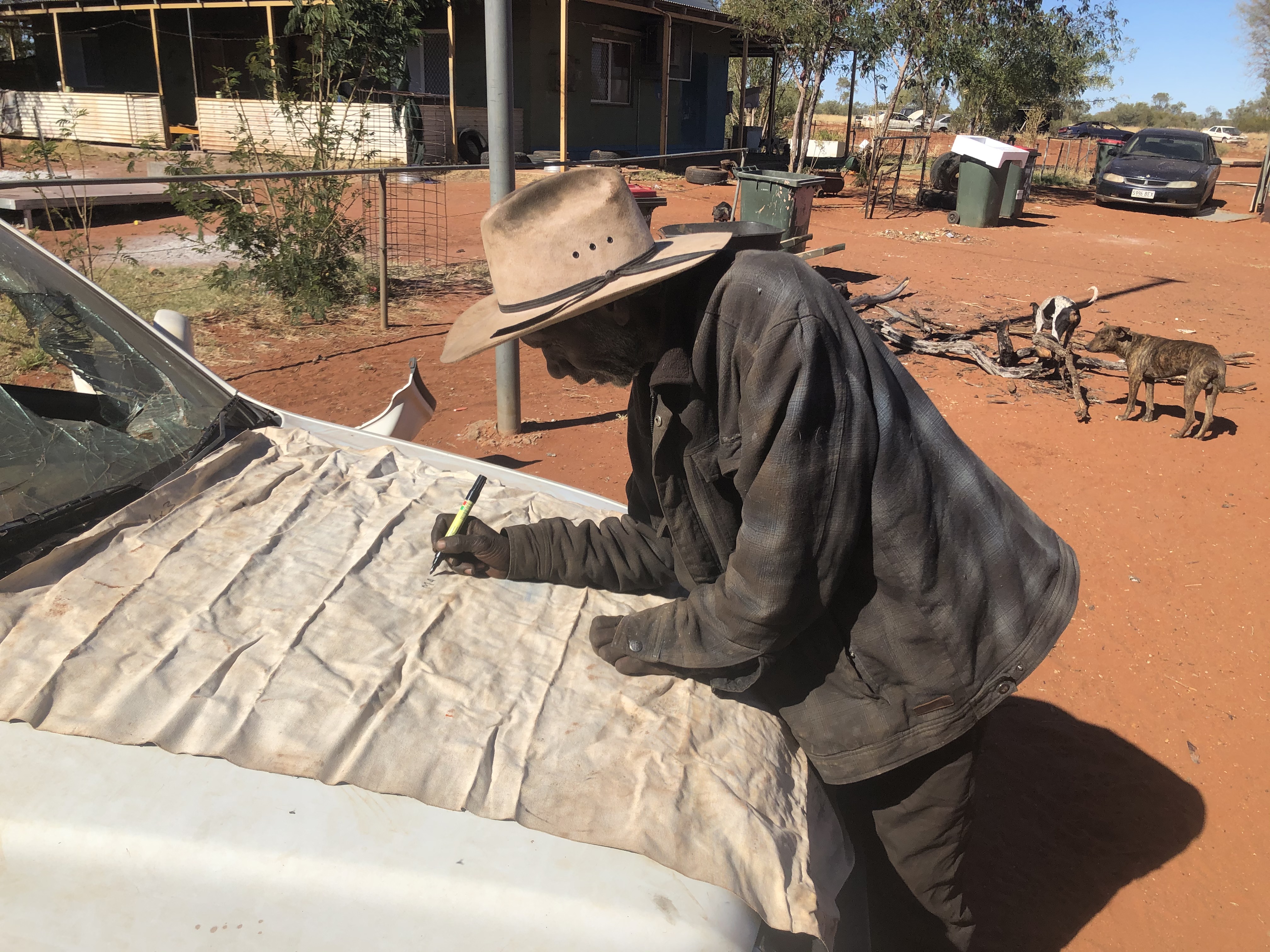 And did I give Matthew some more canvas? Of course I did – two 90x60’s and enough paint to paint a house with!

Polly Ngale also lives in this O/Station, but she was away on ‘sorry business’. However, two of her granddaughters, Miranda and Andrina, came across and said hello. They said that Polly had asked for some canvas if we turned up, so I left some with them.

Geyla Pwerle is the youngest of the four Pwerle sisters – Minnie, Molly, Emily and Geyla. She has the most beautiful and natural smile that one could possibly possess. Last time I was out (in Feb) she was wearing a Richmond Football Club beanie. She doesn’t speak English and really wouldn’t know much if anything about football (Aussie Rules for those readers who don’t know!  Anyway, in one of my last blogs or something that I wrote, there was a picture of Geyla with this Richmond beanie. I got a few comments from some Richmond supporters, so I thought that I would see if I could entice her to wear a much better beanie - a Collingwood one! and I threw in a scarf as well. Anyway, she loved it and beamed that beautiful smile (I did hear Teresa Purla mention the West Coast Eagles, but I ignored her). Anyway, it was all good fun. 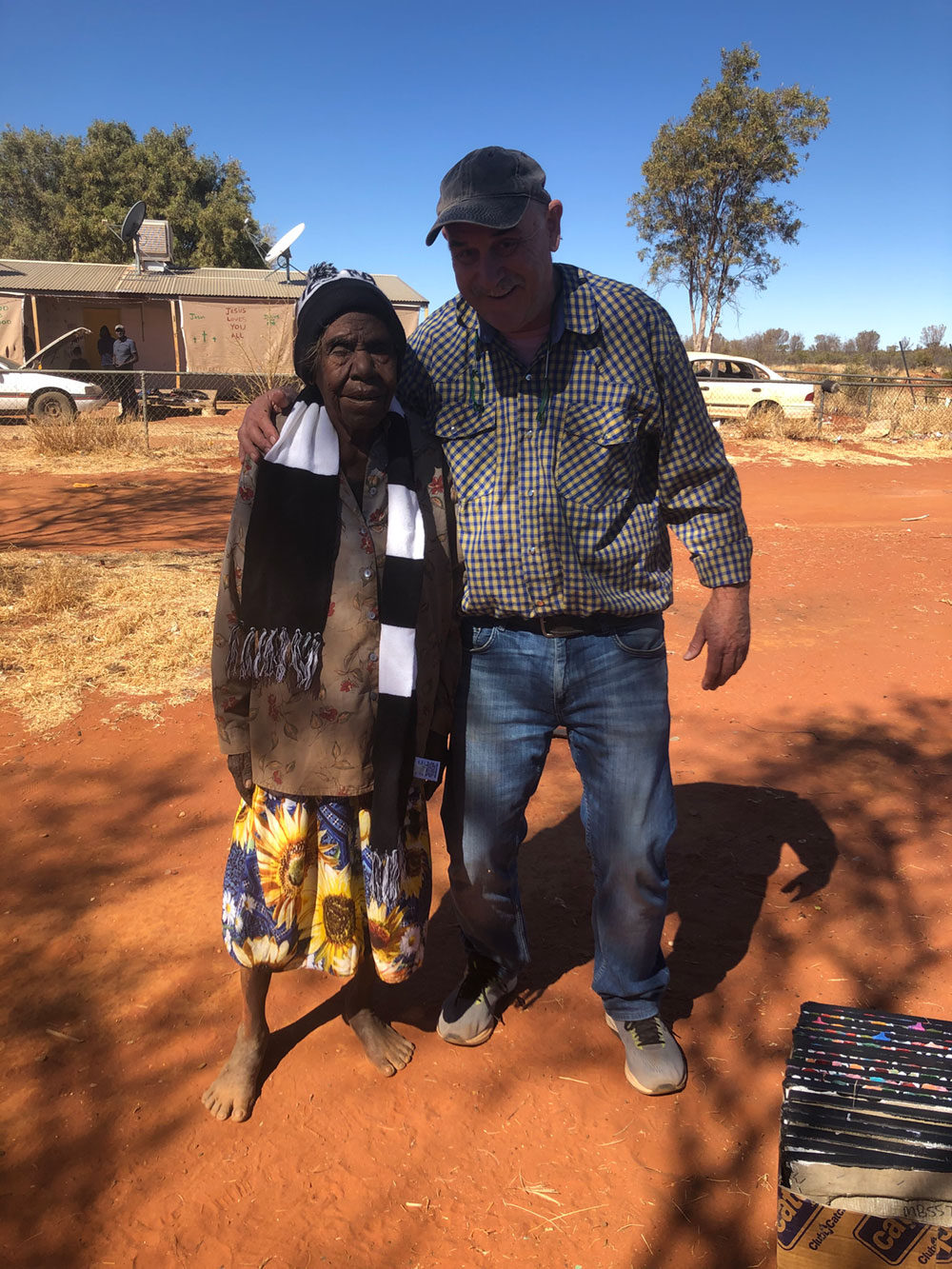 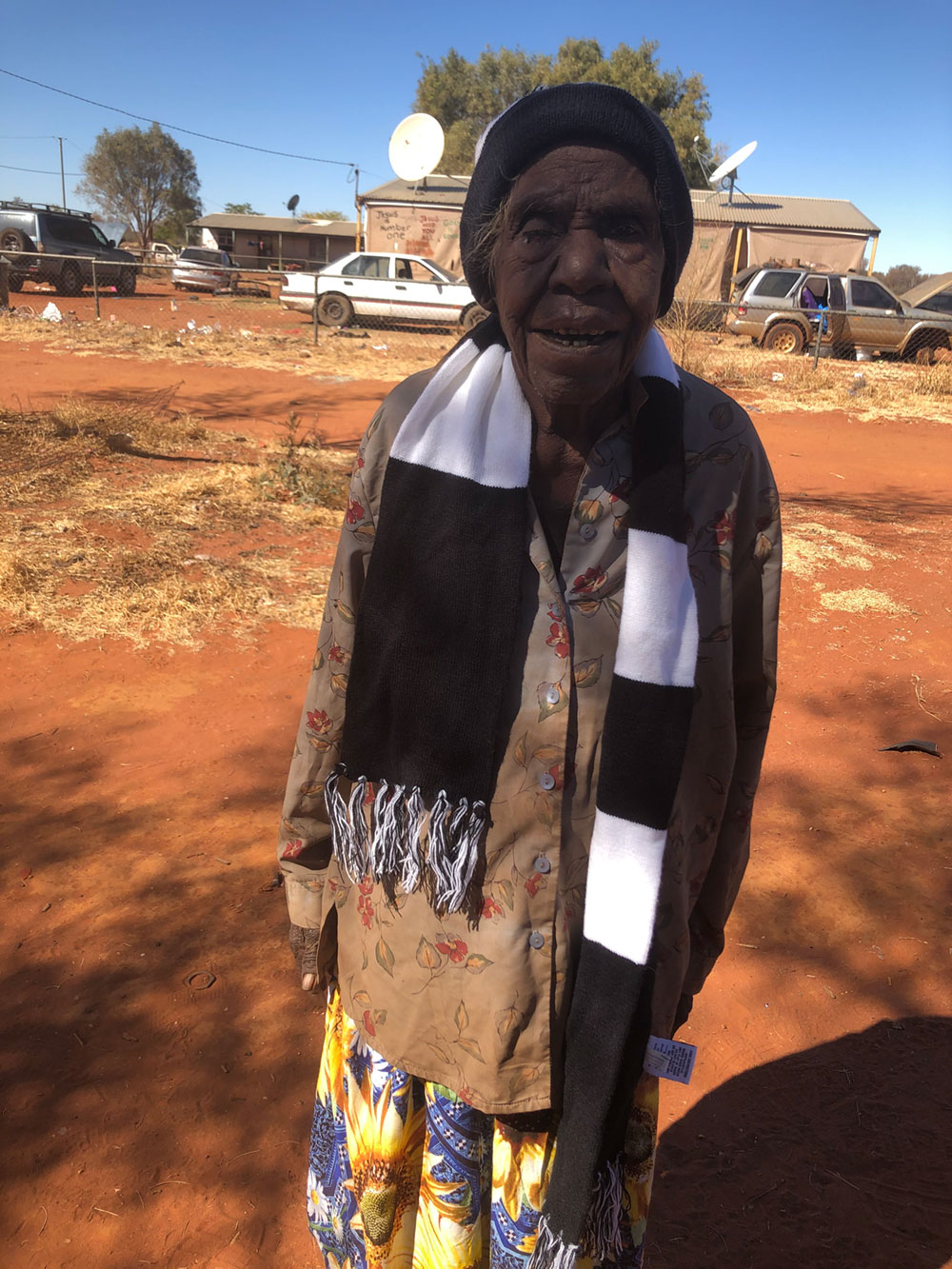 From Atnwengerrp we headed to Rocket Range and caught up with Katie Kemarre, Hazel Morton, Lucky Morton and a few others. Angelina Ngale was away at the Sorry Camp with Polly.

Then we went to the community at Alparra because Sacha Long had phoned us and wanted to catch up. But she wasn't there, so from there we drove to Boundary Bore because I particularly wanted to catch up and say hello to Kathleen Purvis (the late Greeny Purvis' wife). I had heard that she hadn't been well. We got there and she was looking pretty good and said that she was much better. She too has a beautiful smile (nearly as good as Geyla's - haha!) She introduced us to a few grandkids and we also caught up with Patsy Long, Judy and Jennifer Purvis and a bunch of others playing cards. I got invited to play but I passed. I reckon they would have cleaned me up pretty quickly!

We stayed for about half an hour before heading off back to Alice Springs. Home about 7.40pm after driving a little over 600kms. Savannah had been really good all day and had an experience that she'll keep for the rest of her life.

The paintings were catalogued the next day and some will be on the website soon for you all to have a look at.