After packing the Toyota on Sunday 15th of May, I got away right on 8am on the Monday. I hit the Sandover Highway at 9.10am, arriving at Camel Camp Outstation at 10.30. The weather was a perfect 21 degrees. Elizabeth Mpetyane and Angeline Ngale were first across to my vehicle as per normal. Then Pauline Moss (Morgan) arrived with some nice simple dot paintings depicting women, coolamons and digging sticks. She’s a quietly spoken ever reliable artist. 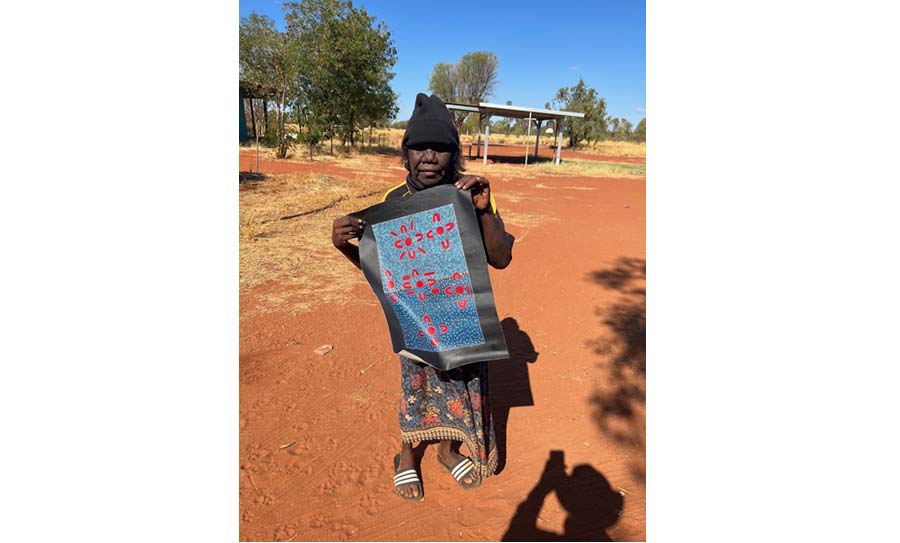 Rebecca Gunner also had some completed small ones that I had given out on my previous trip. A couple of other artists who I hadn’t seen for years were also there and asked for some canvas and paints which I gave out, and I’m looking forward to seeing the end product on my next trip.

Old Motorbike Paddy (born 1932) came across last and brought over 2 canvases. What a lovely old man he is. He told me the meanings of the paintings and quietly started singing his Dreaming songs about them. It very much reminded me of Gloria Petyarre in her later life – she would often come into our Gallery, stand in front of her paintings, and sing her stories. 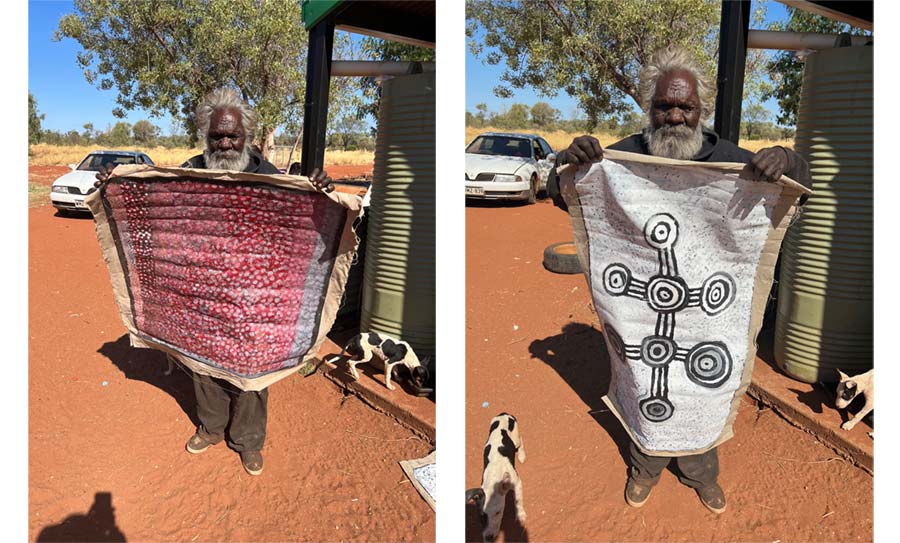 I really liked these paintings by Paddy – one was the story of the Bush Plum and the other was his Rain Dreaming. There were a couple of non-indigenous men from a political party (volunteers giving out how to vote cards before the mobile polling booth came through) there watching me interact with Paddy. After I finished with Paddy, I had a bit of a chat with them. One said that he didn’t like the paintings at all. And I have understanding of that – my interpretation is that he has tastes of beauty to the eye. I would think that he would really like the Hunter sisters works – which I love too!

Having worked with the Utopia artists for 37 years now, I have a much broader vision – and much more individualized! I appreciate Motorbike Paddy’s work through his eyes – when we started working together about 4 years ago this is what we talked about (with his granddaughter Denisa as an interpreter). His art has always been about his stories and his enjoyment. He is quite frail now as happens with people of his age. He wanted another couple of canvases and Denisa said that he still likes painting – but just at his pace. (This Bush Plum painting will go into our permanent Collection, and the Rain Dreaming will go on sale in due course.)

Atnwengerrp Outstation (or Noongy for short) was my next stop. Arrived there at 12.22pm. The flies were bad, and the temperature had shot up to about 30 degrees. I was busy as usual and received some terrific works from lots of artists. The political helper who didn’t like Motorbike Paddy’s paintings would have loved this Susan Hunter painting I am certain. 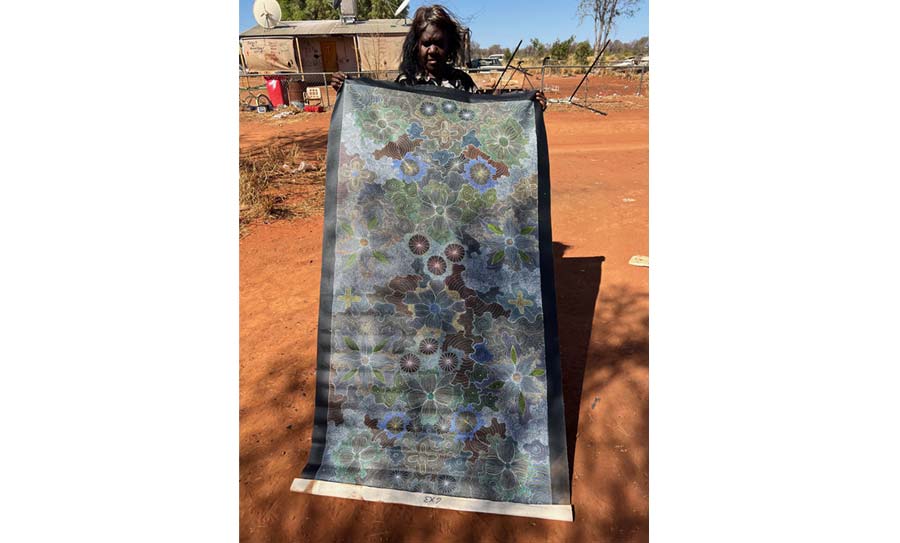 Paintings came in from Susan and Jessie Hunter (Annie showed me some of hers that were semi completed), Lizzie Moss, Emily Pwerle, Mary Lewis and Janie Morgan. Teresa Pwerle came over and had a good chat as she normally does. She showed me a near completed canvas that was earmarked for an Exhibition in Canberra. She also provided me with an update that she had received on the planned housing for the old Pwerle sisters and the Hunter ladies - “not too far away from it being started”! Apparently, there is one other house in another Outstation to be built before this one gets under way. I hope so anyway!

While mentioning the old Pwerle sisters, Susan Hunter told me that Molly’s sight has really deteriorated over the past couple of months, and she won’t be painting anymore. She also said that Geyla is having a rest from painting too, but Emily is still keen. 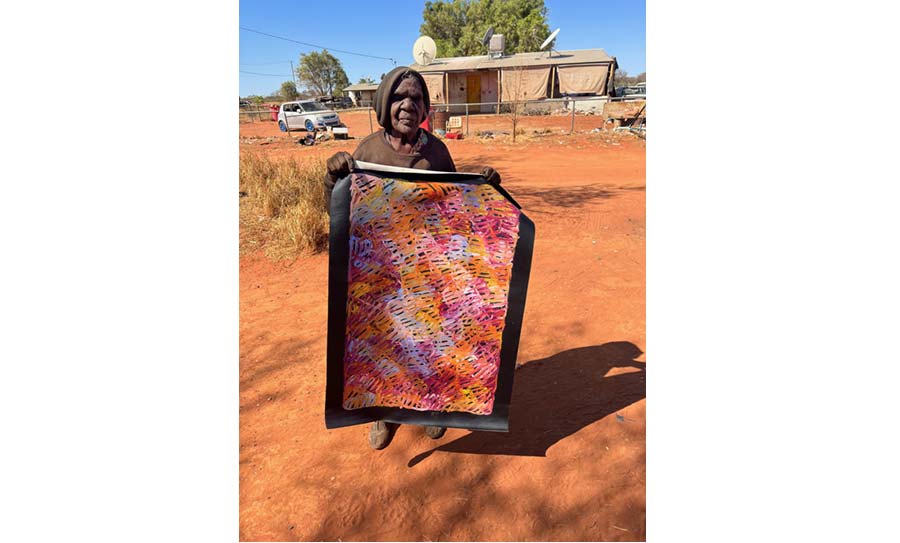 Rocket Range Outstation was my next port of call where I caught up with Lucky, Audrey and Hazel Morton, Katie Kemarre, and Lily and Michelle Lion. I wasn’t really busy with paintings, so most of my time was chatting and catching up on local news. Lucky told me that Lena Pwerle’s funeral was called off last Saturday and is now planned to occur “next week”. She wasn’t sure which day next week though. She also told me that Michelle and Lily’s older brother David Lion (a past painter) died recently in Mt Isa from “too much drinking”. And a niece has also passed away recently. So, they certainly were going through a tough time as a family. Having said that though, they were certainly chatty in the 30 or 40 minutes that I spent there. Michelle brought two of Lily’s partially completed paintings to the car to show me where she was at. See the image below.

On another positive note, they all wanted more canvases, so I gave out plenty – along with paints, brushes, nibs and small paint bottles. Painting and having opportunities to explore their creative selves in this arid outback wilderness is so important to those individuals, who seek more than a day-to-day existence that leads many down paths without substance or much hope.

From Rocket Range I headed across to Kurrajong Outstation and caught up with some of the Payne family. Violet had some lovely colourful paintings all completed. Violet was a Teacher’s Aide for many years and gave me a good rundown on where the family were scattered around at the moment. 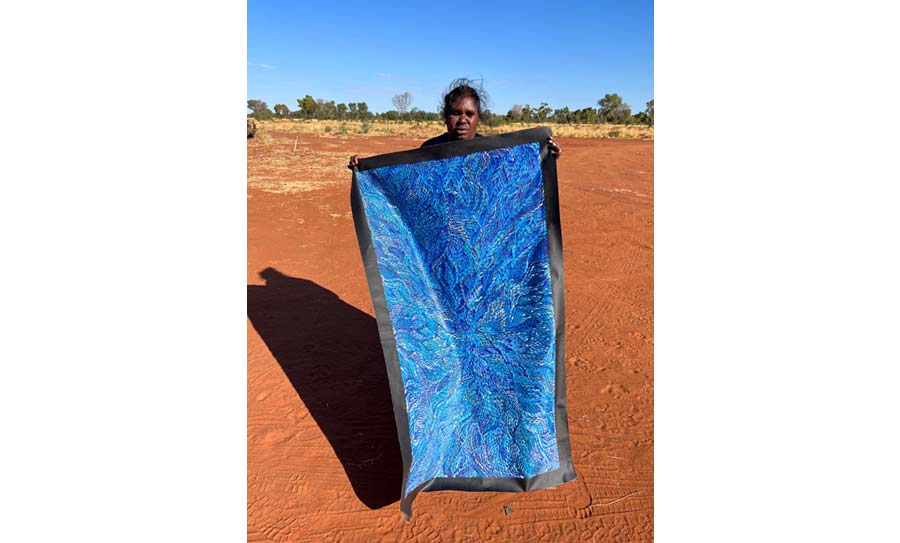 Brother Johnny Payne was there and asked for some canvas which I gave him. And younger brother Eddie (who I mentioned in a previous Blog) towered next to me and reminded me that Richmond Tigers was the best team in the Australian Football League. I nearly opened my mouth to disagree but looked up at him and changed my mind!!

A big drive home on a not too pleasant dirt road! 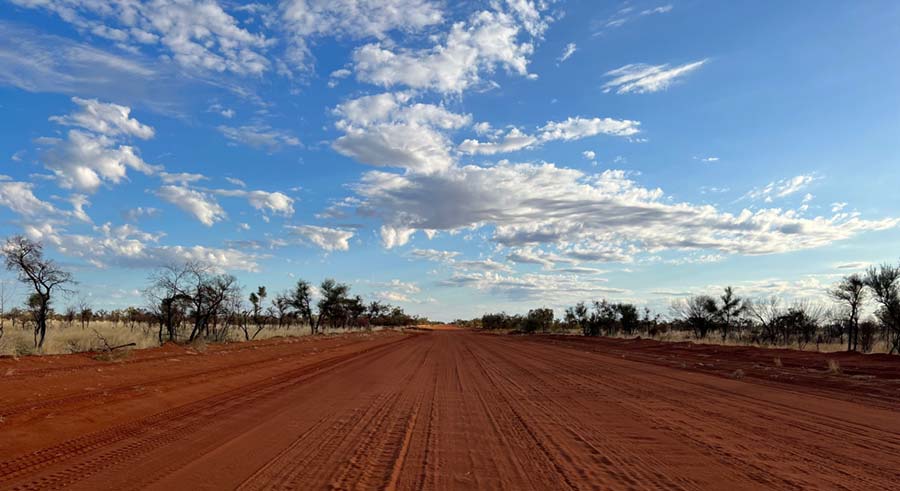 Once home, I was greeted by an amazing full moon rising in the East. 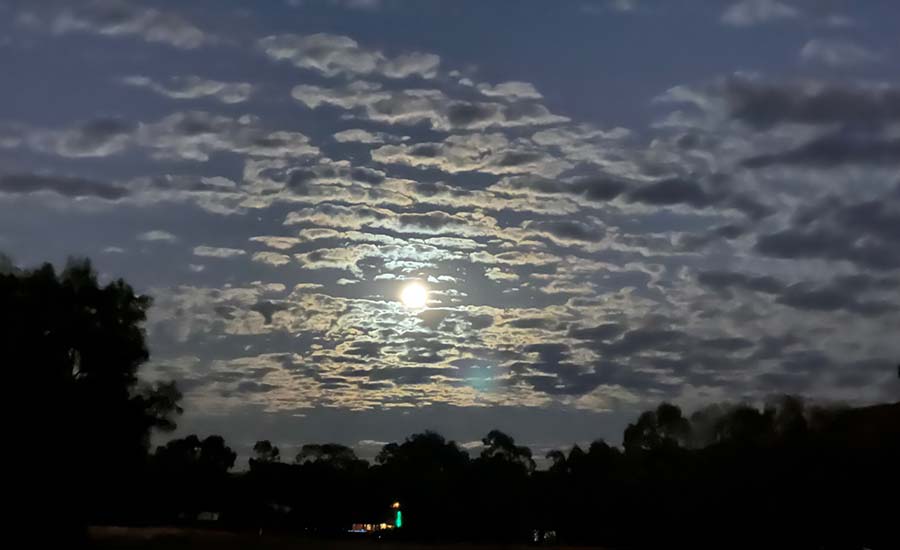 Stay good and be positive in whatever you do.