The Northern Territory has been relatively free of Covid until lately, with a few cases occurring up around the township of Katherine. This resulted in a few good rules introduced for visiting Aboriginal Communities – so for this trip I had to prepare a little differently!

So, on Sunday Nov 28th I went to the Alice Springs Rapid Antigen Testing Centre and was Covid tested. On confirmation that I didn’t have it, I packed the Land Cruiser up with canvases, paints, brushes and all the other incidentals that I take bush – including face masks!! I refuelled and was ready to head off the next morning.

My first stop was Camel Camp, and there were quite a few artists waiting for me there! Josie and Dinny Kunoth both had some nice wooden carvings, and Josie also had quite a few paintings completed as well. Angeline Ngale had two good sized canvases finished too! Elizabeth Mpetyane had a wooden sculpture as well – she had been in town the previous week and dropped her paintings off to Tomoko at our Warehouse. 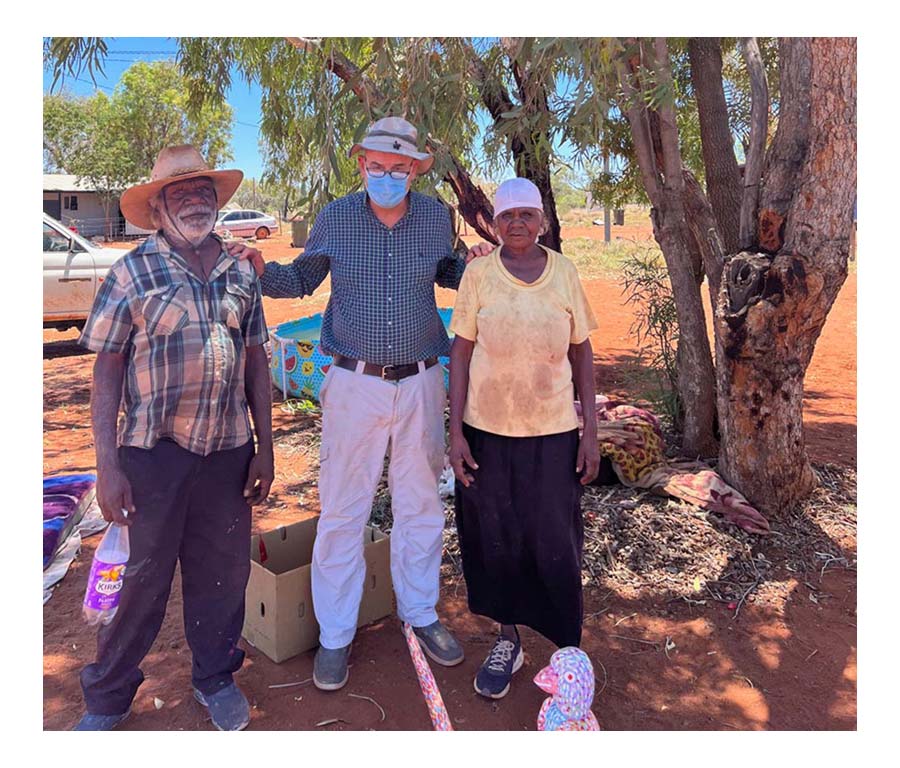 David Bird junior also had 2 wooden carvings! David had never done anything for us before, and I’m not sure whether these were the first he had ever done?? It was nice to have met him, and to see that he wants to have a go!! I took a few pictures of him and wrote down a few details so that Tomoko can make up an initial artist profile. 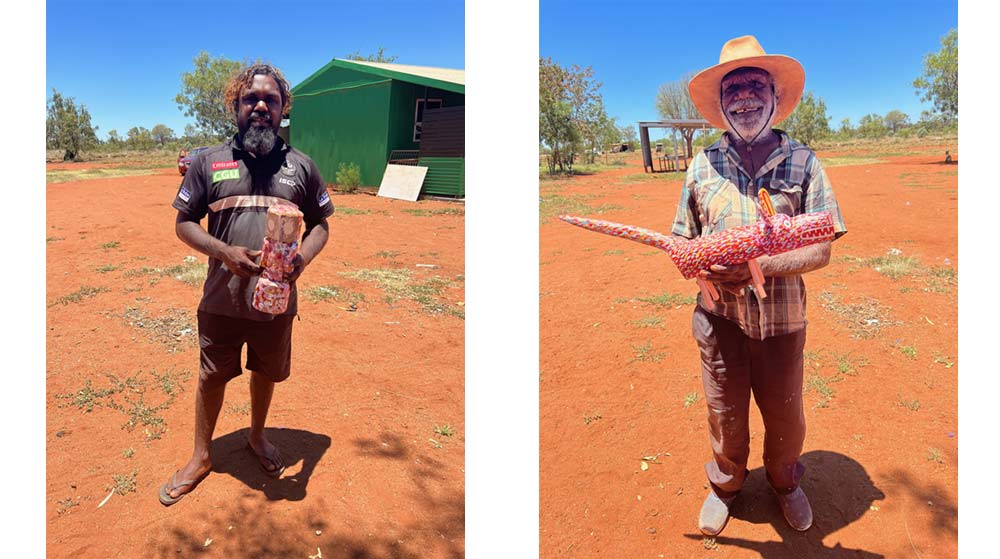 Motorbike Paddy was there too! What a lovely old man he is! He’s recorded as being born circ 1932, so that makes him pretty close to 90 now! There are plenty of stories that he could tell! Polly Ngale was there as well. She didn’t have any canvas but wanted some, so I gave her a couple, along with paint and brushes. Pauline Moss was another that I gave canvas to, and lots of other family members came around the car and had a bit of a chat.

From there I drove to Atnwengerrp Outstation – called Noongi for short! Most of the artists had been to town last week and had taken their canvases with them, so today the pressure was really off – and I could chat more! And that was really nice! I did give out a lot of canvas to the regulars, and also to a new artist – Isabella Barnes. Last trip Teresa Purla introduced me to Isabella, and said that she was keen to paint. So, I gave her a couple of canvases and paints to start her off. The result was pretty good I thought, and she was keen to continue so I gave her some more. I took the standard profile picture (as good as my limited ability allows), so you’ll probably see her on our website sometime in the not-too-distant future. 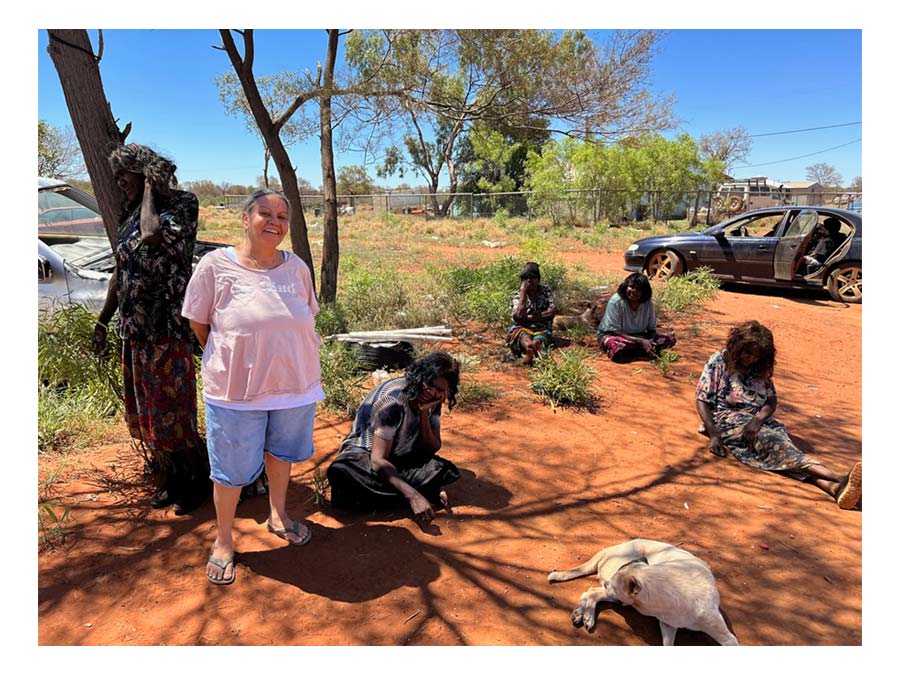 From Noongi, it was to Rocket Range Outstation, and the only artist there was Lucky Morton – the others were away visiting family and friends. I’ve known Lucky since way back in 1986. And I brought that up in conversation, and said, “Gee we’re starting to get old Lucky”!! And she just nodded and laughed!

Then to Kurrajong Outstation to visit Violet Payne and any other Payne family members. Violet was the only artist there. I really like the design that she now does, and it’s a real credit to her for her persistence over many years of trying, trying, trying to find that natural flow that works for her! Her youngest brother Eddie Payne (who doesn’t paint) came over to the car too! He would have had to have been 6’ 5” (195cm ish) tall. Someone that I wouldn’t give cheek too anyway! He was wearing a Richmond Tigers guernsey. I said, “You’d have to be a ruckman, wouldn’t you?” He said, ‘Yep”. I said, “But surely you don’t barrack for Richmond?” He looked me in the eye and said, “I barrack for Richmond!”. I couldn’t help myself and said, “I reckon Collingwood Magpies are the best though!”. He was a fairly quiet fellow, and looked down at me from way up there, and said, “No!” My next comment was about the weather I think!! It was fun, and we all had a laugh 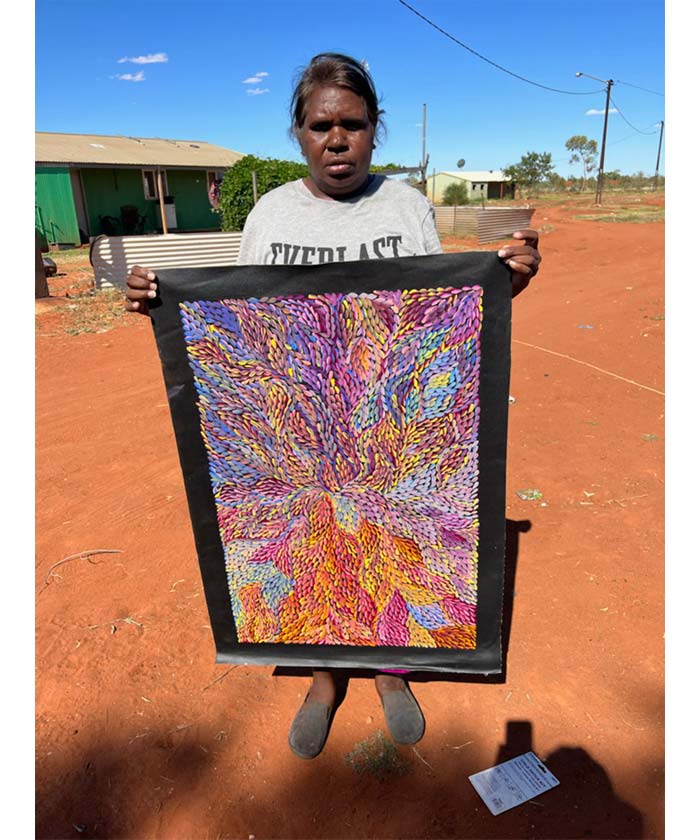 Photo: Violet Payne at Kurrajong Out Station with a nice 90 x 60 painting.

But I did think later while driving along, if Eddie McGuire only knew the risks that us Magpie fans take for the Good Old Collingwood!

For a touch of trivia, Violet and Eddie’s parents are Doreen and Harold Payne. Doreen is a daughter of Lena Pwerle.

It was a good day, definitely one of my easiest bush trips, because so many of the artists had brought their paintings to town at the end of last week. The temperature was about 34 degrees, the trip back uneventful.