Last Wednesday (12/2/20) I once again headed out to Utopia and some of the Outstations – the first time for 7 weeks!! It was damn hot! Temperatures around 40 Celsius in the shade! And the bush flies were just shocking!!! I left at about 8.15 in the morning and was home a little after 8pm. About 625kms I think I totalled for the day and spent some 6 odd hours on my feet with artists collecting completed canvases and distributing more out.

Many of the artists were like me, they were wearing fly nets!! The district had had heavy recent rains, which of course was fantastic for the land and the vegetation because it had been so dry for so long. However, apart from new green grass and the germination of a trillion seeds, a zillion flies were given life!!! Within one second of stepping out of the car, there were a hundred trying to zero into your eyes, nose and ears!!! Thankfully I took the fly net!! 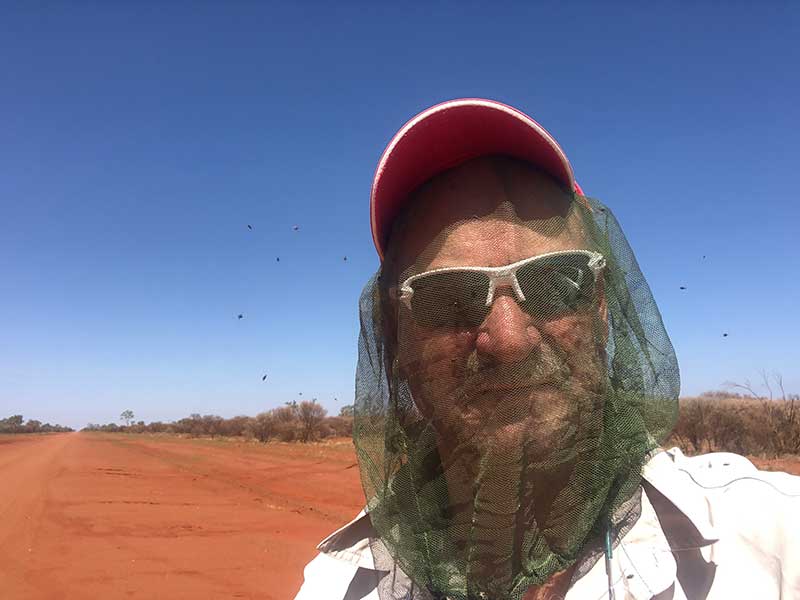 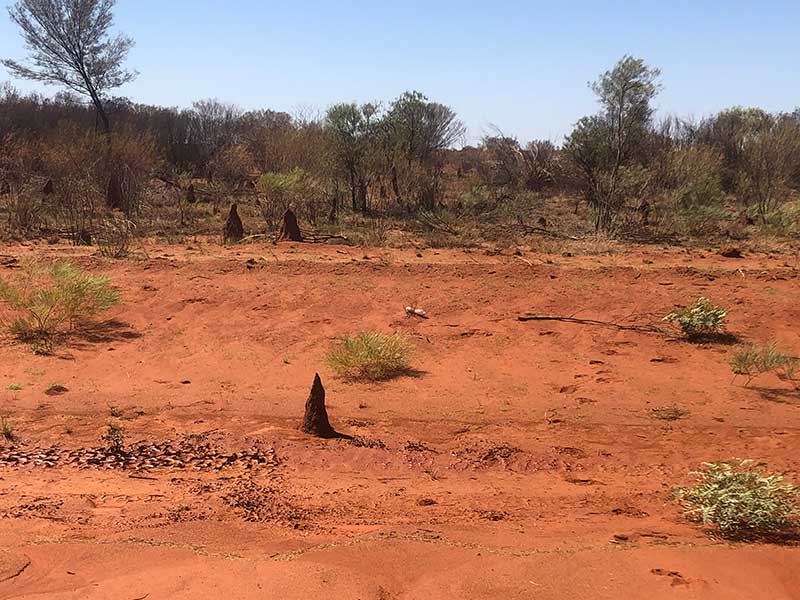 In light of this, the artists were still enthusiastic and really produced some beautiful work in this home environment of theirs. 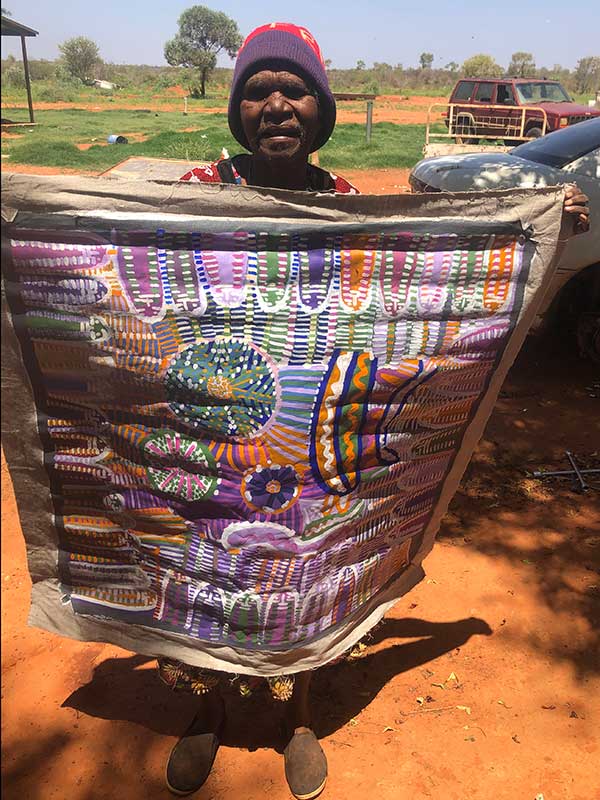 Katie Kemarre was her consistent self with a few nice paintings. This 120 x 90cm with its dominant colour being grey was really soft and gentle in its presentation and I liked it a lot. The 120 x 30cm was in contrast a different style with the use of bold purples and yes I loved it too! 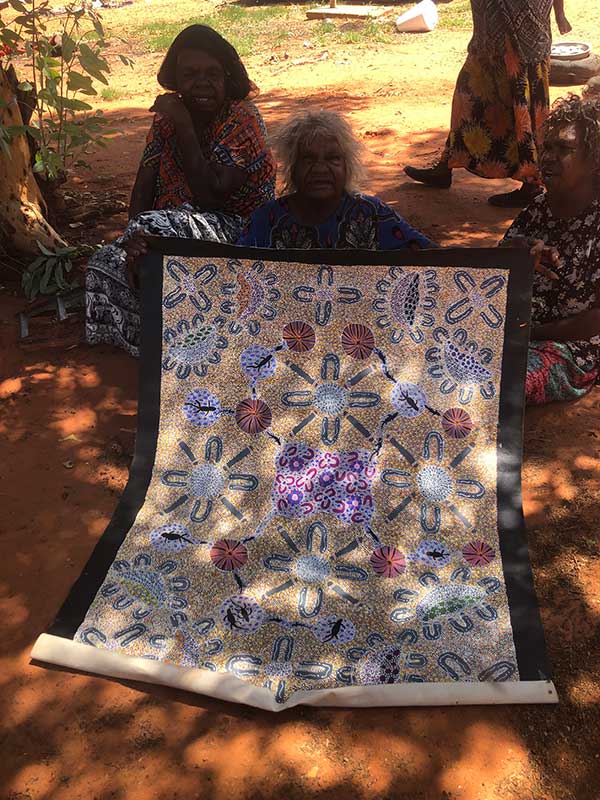 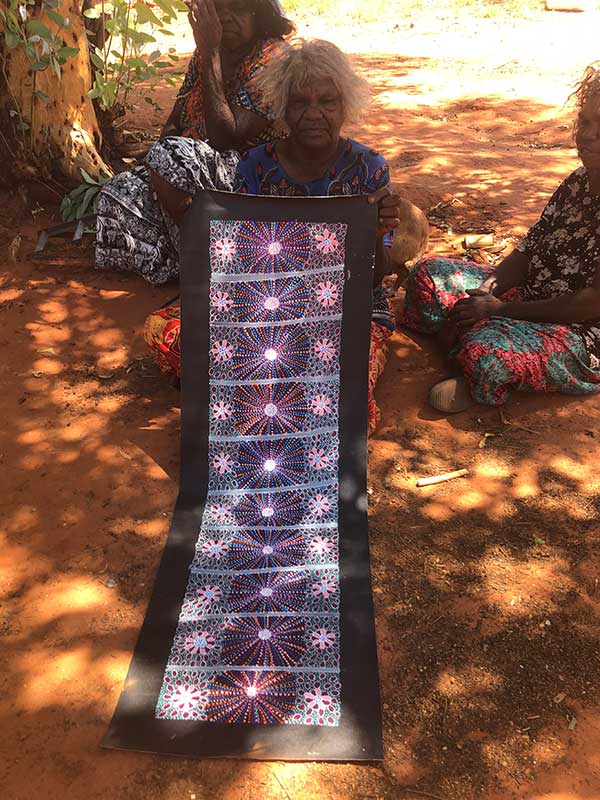 Katie Kemarre with her new paintings.

At Atnwengerrp Outstation, Selina Teece had this absolutely wonderful 180 x 90cm Landscape. It was a really special one. It won’t be long before it will be on a wall somewhere in the world. 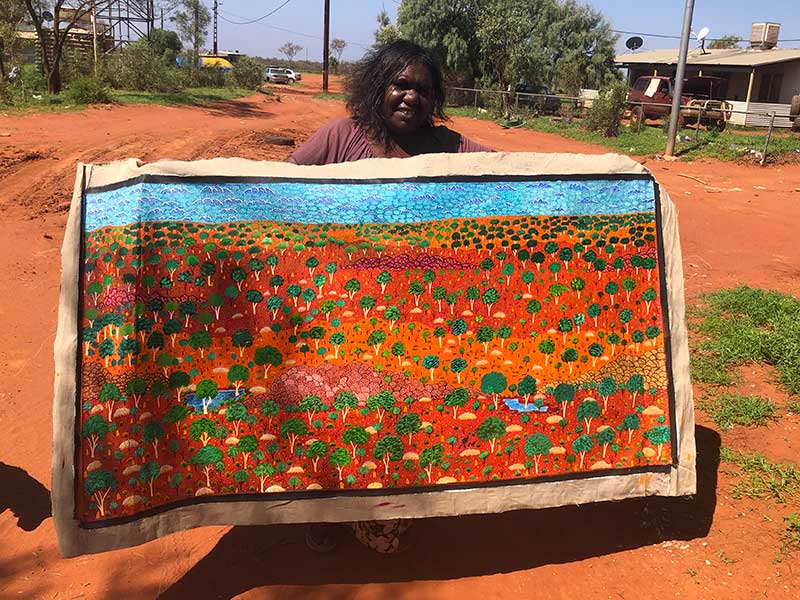 Susan Hunter is such a consistently good painter. She had a magnificent 180 x 180cm finished. I have no idea how many very, very fine dots that she put on the canvas, but there were thousands and thousands. And her use of colour was exceptional. The story line being about the native bee. 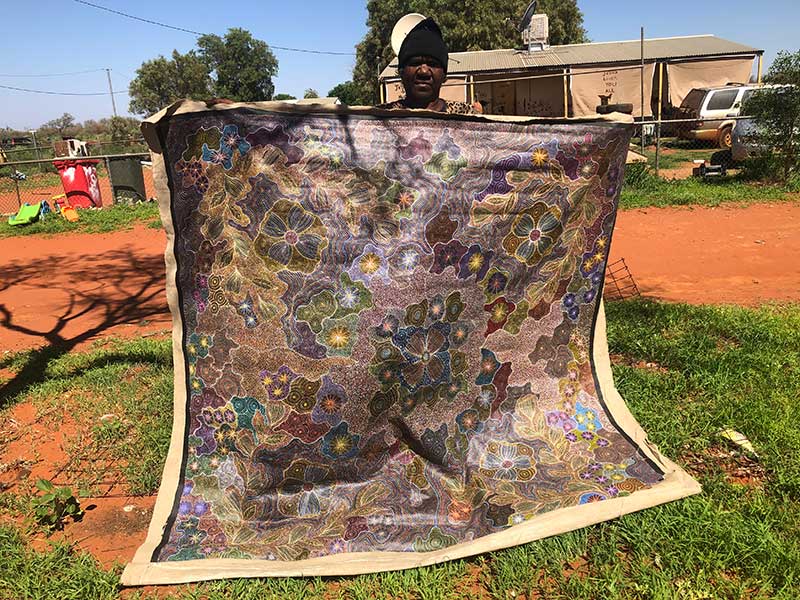 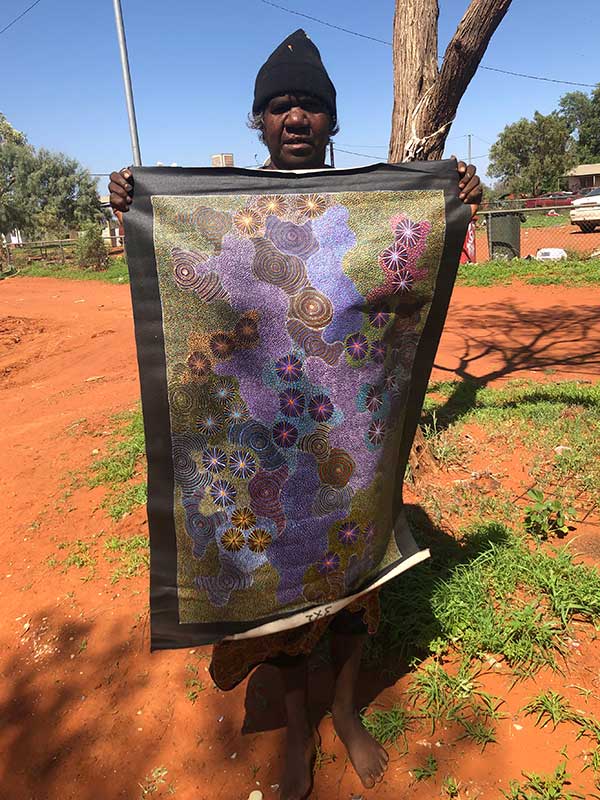 She told me that in these summer months, she paints in the early morning and the evenings because it is far too hot during the day. She has a fantastic work ethic and is an exceptional painter. Additionally, she had a lovely 90 x 60cm painting finished too.

Many of you readers would have heard of Minnie Pwerle who passed away in 2006. Well she had 3 younger sisters. All were born in the bush and there is no record of their date of birth. Molly who is estimated to be about 90 years old, Emily estimated to be in her late 80’s and then the “young one” Geyla (sometimes spelt Gayla), who is two or three years younger than Emily. They all had some paintings finished as well. 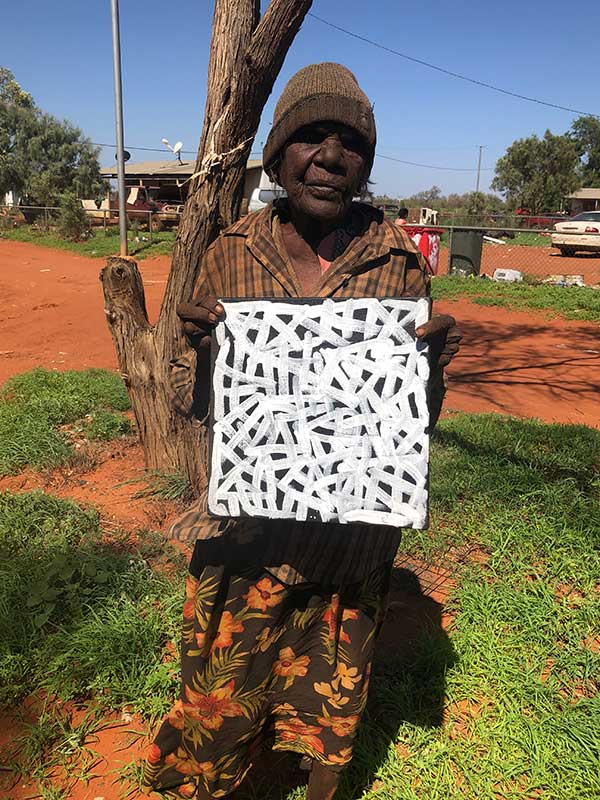 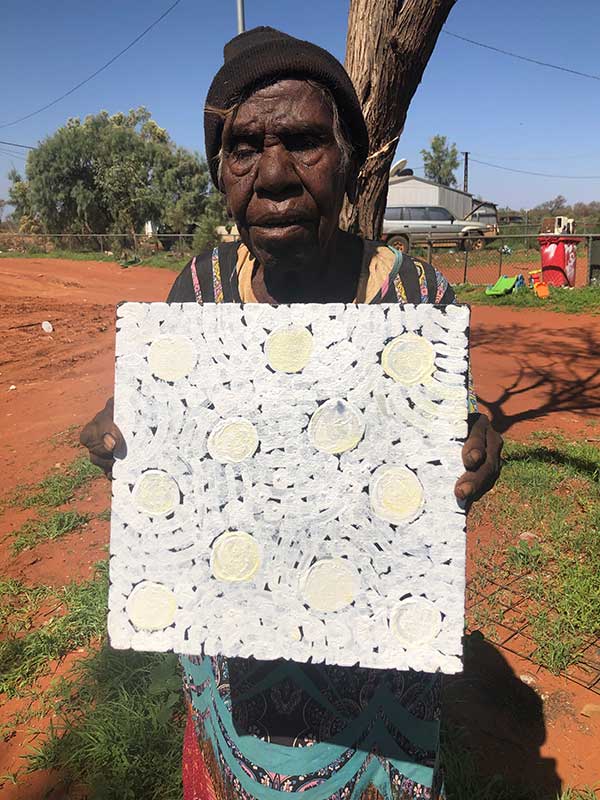 Emily Pwerle and Geyla Pwerle (The 'young' one) 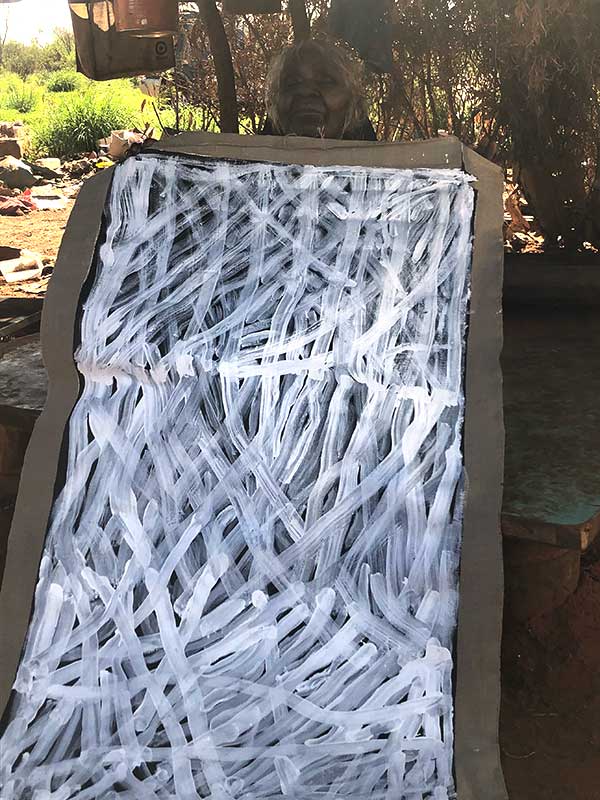 I had earlier stopped in at Camel Camp and collected a couple of paintings from Motor Bike Paddy and his son Matthew Mpetyane. Matthew is a real friendly and colourful character who is very talkative, but his command of English is not good, so I miss a lot of what he has to say, although Denisa (his niece) is often there and translates. Matthew’s paintings are usually all very “roughly” combined dots with a smudge here and a smudge there, that when stretched create a quite striking composition. So, if you are looking for something with this type of character to it, then his work should be seriously considered. 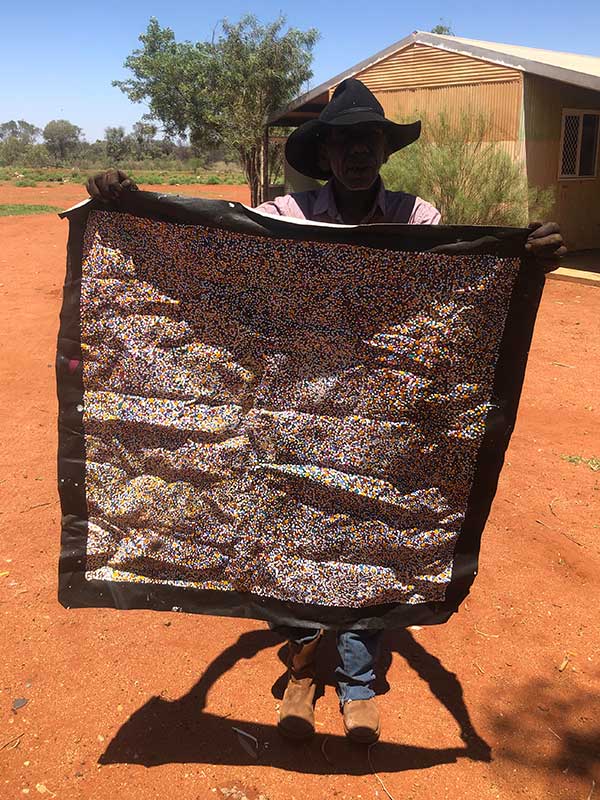 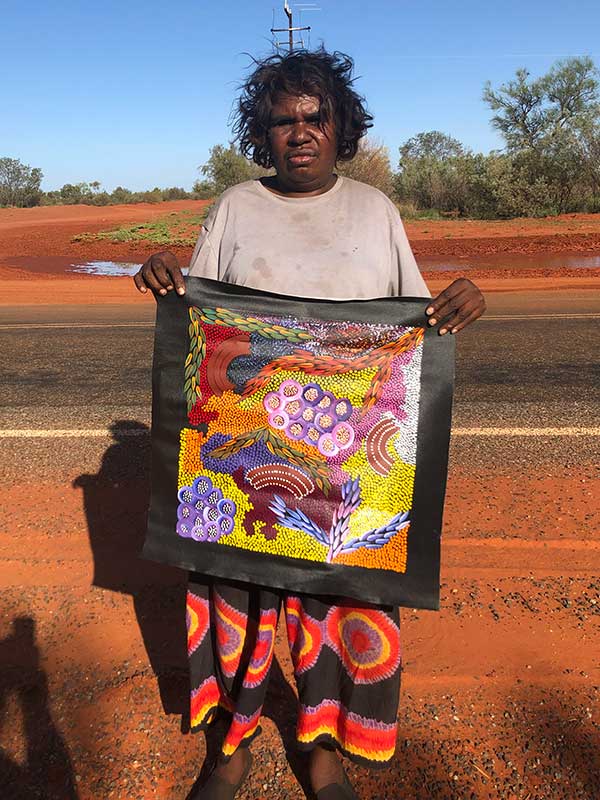 Gypsy and Dorothy Jones also waved me down. They didn’t have any completed canvas but wanted me to give them some new ones and paints – which I did. Other artists who I received nice paintings from include Annie and Jessie Hunter, Lizzie Moss, Colleen Morgan, Janie Morgan and Janice Clarke. When I got home that night I felt as old as Molly!!

The following day the car of course needs to be unloaded and the cataloguing begins. This takes a long time because not only do I collect larger paintings, but also many, many small ones which are popular with tourists and help with our cash flow.

Lots of people ask me why I still do all of this, and there are many reasons, but put simply, over 35 years I have built up a wonderful affiliation with many of these people and I want to continue to support those who are keen to work. And there are a lot! And sometimes I wish they weren’t so keen!!! Additionally, I have about 20 staff in total. Most, if not all, enjoy the best part of their work or work challenges (I think)! They also have mortgages and living costs and rely on their job to meet those overheads. And I think that we are as a whole, a pretty good team that enjoys that environment. So, I also have a responsibility to try ever so hard to keep this in focus too!

I hope that you have enjoyed this and take care wherever you may be.