Memories of Ada Bird Petyarre by Tim Jennings, Mbantua Gallery. Tim looks back on his relationship with Ada.

I first met Ada Bird Petyarre back around 1985 at a Utopia Outstation called Angkula, some 190kms north east of Alice Springs. This Outstation is about 10 or 15kms away from Mulga Bore Outstation, which at that time hadn’t been built but is now quite a large community. Also living there at that time was her husband Tommy Bird (who passed away not long after), Lindsay Bird and Gloria Petyarre. Ada at the time was heavily involved in the Utopia Batik movement. Acrylics on canvas were quite uncommon! It was about 1987 or 1988 that Ada started to paint with acrylics and she was just a natural! Probably because of her history with batik but I also think that what she painted on canvas was what she had painted on human bodies for much of her adult life. Ceremonial body paint was simply a big part of her life! The local word is Awelye, pronounced “A-wool-ya”. 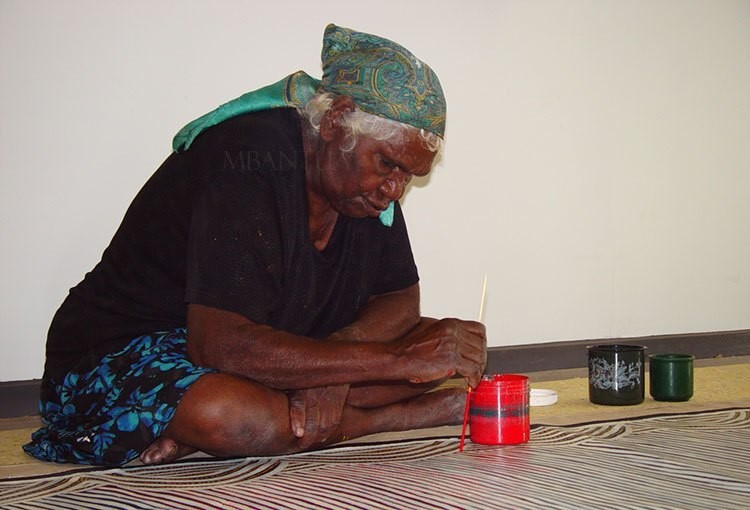 For the 30 plus years of knowing the Bird family very well, I was always under the impression that Ada and Tommy only had the 6 children – being Paddy, June, Hilda, Colin, Steven and Ronnie. Just recently I sat down and had a yarn with Colin Bird and his wife, Colleen Wallace, and they told me there were 3 other siblings too. There was Linda, who was first born and died when she was 30. Colin said that he was maybe 10 years old years old at the time. And the other 2 siblings were Graham and Jamie, who were born between Colin and Steven and both died relatively young, probably back in the late 1960’s. But life went on out there in the outback and Ada raised and guided them all through the teen years, resulting in a tight-knit and loving family. And then there was all the grandkids – 11 alone to Paddy and his wife Eileen! And Ada was ever present with all of them..

Ada was always very vocal! Always with good humour and passion.. Made me laugh so often!! 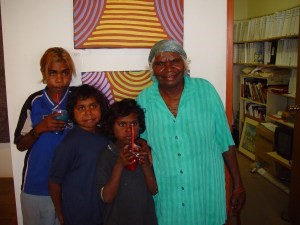 Ada’s paintings, as mentioned above, were nearly always Awelye – Body Paint and Ceremony. The majority were about the Mountain Devil Lizard which was one of her totems passed to her from her father. (And passed also to all her Petyarre sisters: Kathleen, Gloria, Nancy, Myrtle, Violet and Jean). 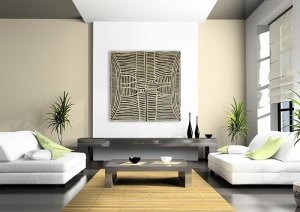 Above, Kriss has selected a black and white painting of Ada’s that actually shows the Awelye lines and also the breasts to give you some idea of what was in Ada’s mind when painting. Many of her paintings depict the lines that are painted onto bodies for ceremonies. We have selected 20 of these paintings to show you and are offering 40% discount on them all until the 30th of April 2017.

Year by year we lose more of our oldies and with them their own personal history… Ada passed away in June 2009 but her family survives and flourishes.