I got away at 7.57am and while driving up the highway I was wondering how many trips I have actually done to the Utopia region. 1985 was my first trip, so I would think over the 37 years since then it would have to be somewhere around the 1500 to 2000 mark. And the dirt road is still just as rough now as it was back then! I’m surprised that there aren’t more accidents – it desperately needs a grader over it!

Yesterday Barbara Weir informed me that Dennis Kunoth of 3 Bore Outstation had recently passed away. His funeral is to be held tomorrow at Apungalingum Outstation. Dennis was a lovely man and a very talented watercolour artist who unfortunately didn’t paint a lot. I haven’t seen him for a few years but when I did bump into him on the odd occasion, I would always tell him how talented he was and suggest he gets back to painting. He’d have a chuckle and say “Yeh I must do that again one day!” … But he never really did to my knowledge. We bought a few off him years ago and I have only recently put them up on our website. If you want to see examples of his natural talent have a look at them when you have a spare few minutes.

I arrived at Camel Camp a bit before 11am and a few artists were waiting there for me. Old Motor Bike Paddy had a couple of paintings completed. They were quite “messy”, but I thought they were real gems from this 90 year old man – the Utopia Health records have him recorded as born in 1932. His eyes are not good he said. And he wanted a couple more canvases, so I gave them to him!! He giggled (he’s a giggler) and said that he just wanted two! He’s still having a go! He’s really special!

Denisa Hatches, his granddaughter always helps with translation, although Paddy’s English is quite reasonable in the circumstances. Paddy and I have been doing a project together for the past 3 or 4 years and I have purposefully not exposed the work before for a few a number of reasons. And one of those reasons being that if other dealers got involved then the theme could be wrecked, and the objectiveness of it lost! I have seen the “odd one” in other’s hands, but fortunately not many. We will no doubt put together an online exhibition in the not too distant future. 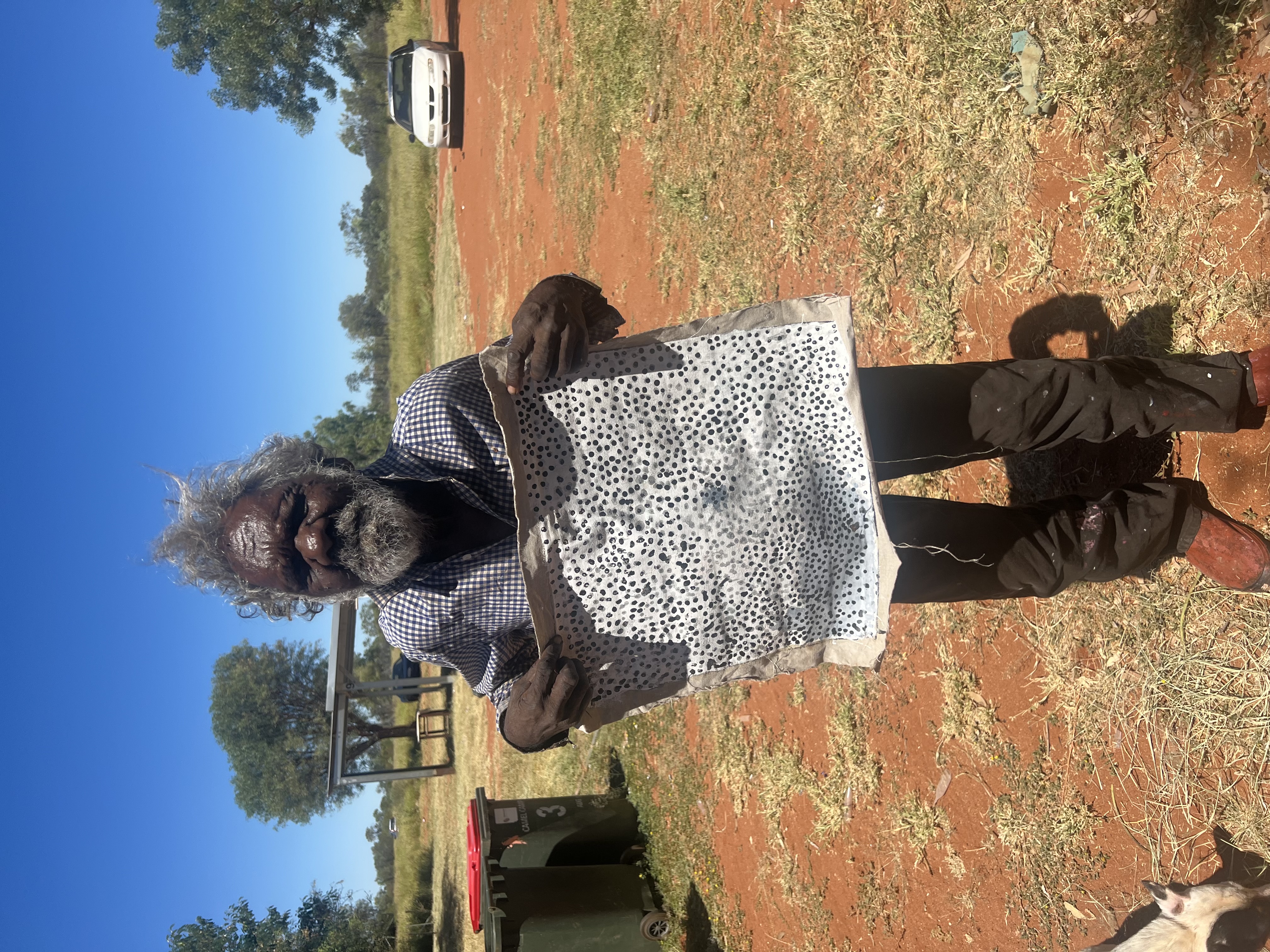 Angelina Ngale was there but no completed canvases – she said that she had run out of paint!! (Last trip I gave her enough paint to paint the house with! But that's what sometimes happens out here.

I also gave canvas out to Denisa, Rebecca Gunner, Elizabeth Mpetyane and Pauline Moss. And had a few nice, completed paintings in from Pauline and Elizabeth.

Departed Camel Camp at 1.25 and arrived at Atnwengerrp Outstation an hour or so later. I was busy but not as much as usual because some of the artists had recently taken completed paintings to town. I collected some nice work from 7 artists out there and gave out quite a lot of canvas as well. It was really windy, about 33 degrees Celsius and the flies were bad! 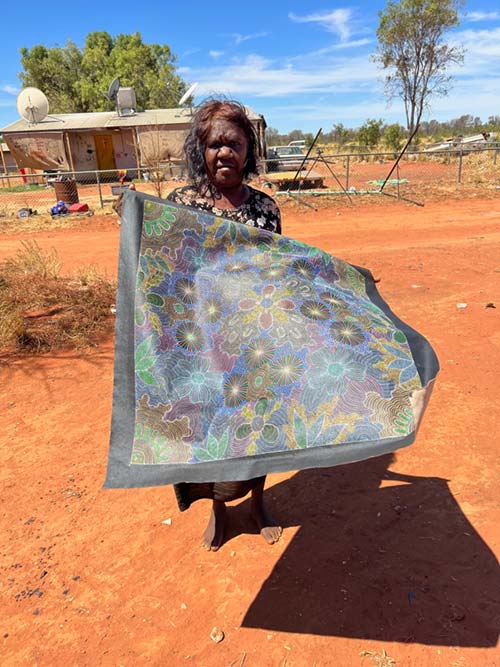 Susan Hunter with her painting flapping in the wind!

Whilst there, I went and checked out the large Humpy that is home for the 3 Hunter sisters and the 3 old Pwerle Sisters (Minnie's sisters). I'm happy to be able to report that Teresa Purla (Barbara Weir's oldest daughter) and myself got together some 8 or 10 months ago and discussed the importance of getting some good basic amenities for these people where the Humpy is. That is, at least showers, washing facilities, toilets and good running water. At the moment there is just a tap that runs out there. Having said this, there is a good facility in the Outstation, but it is 300/400 metres away - too far from where this Humpy structure is up. 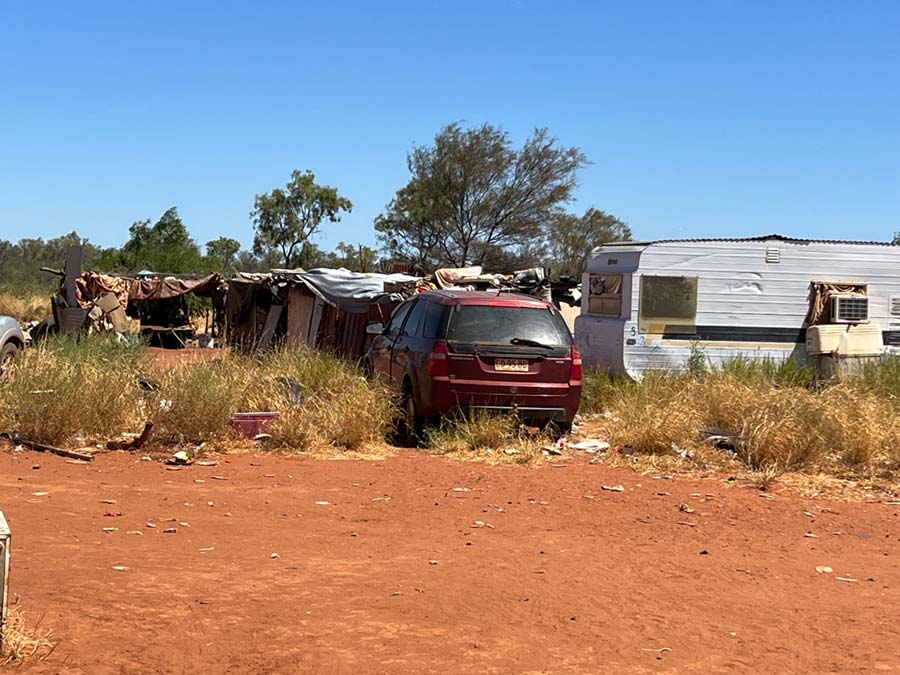 This is the humpy I mention. When the new building is finished, I will write a blog on the new creation with a photo.

Anyway, Teresa and I have had chats with different people in the government and I'm very pleased to say that the government has confirmed that a new structure with everything I wanted (see above) and more will commence work in about 2 months' time. Mbantua's Foundation will be contributing $40,000. Teresa has been super magnificent in this! She wanted a couple of bedrooms, plus a good sheltered area for inclement weather as well as ass the toiletry/laundry additions. She really got her teeth into it and wouldn't let go! And Teresa's dream has been approved! And the government has also been very receptive re this as well I'd like to add! 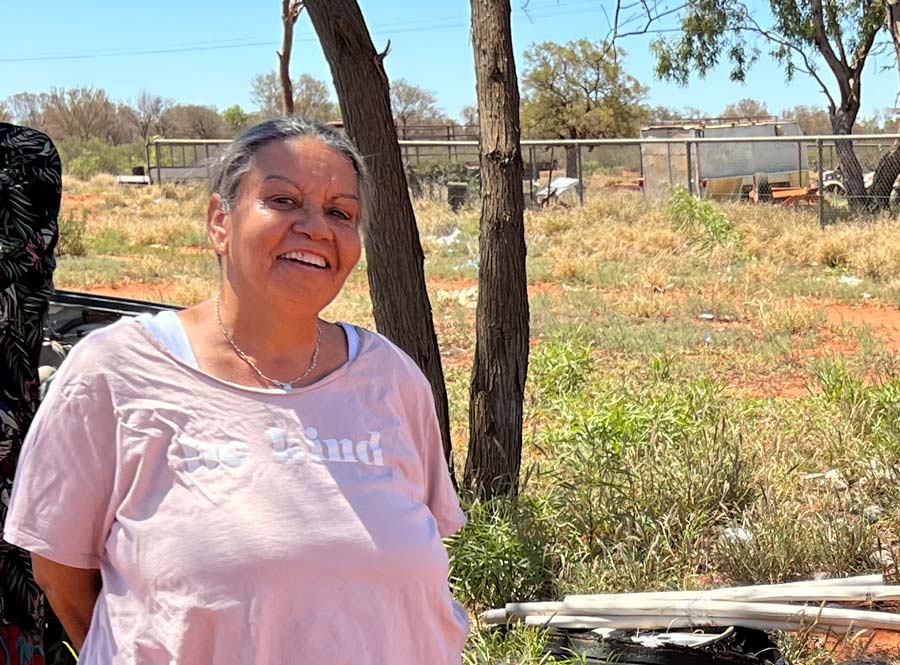 On leaving Atnwengerrp I drove to Rocket Range. Only Carmen Jones was there. I gave her some canvas and paints. That was pretty easy!! Off to Kurrajong Outstation!

At Kurrajong I got some nice paintings from Violet Payne. Also, some very nice dot paintings from her sister Bronwyn Payne and her mother Doreen Payne. They are a great family and lots of them came around the car and we had quite a few laughs. I gave my camera to Laura Payne''s daughter, Scharelle, and she took a few photos of us all. The Paynes's are all family to Lena Pwerle whose funeral will be held on May 14th near Rocket Range Outstation. 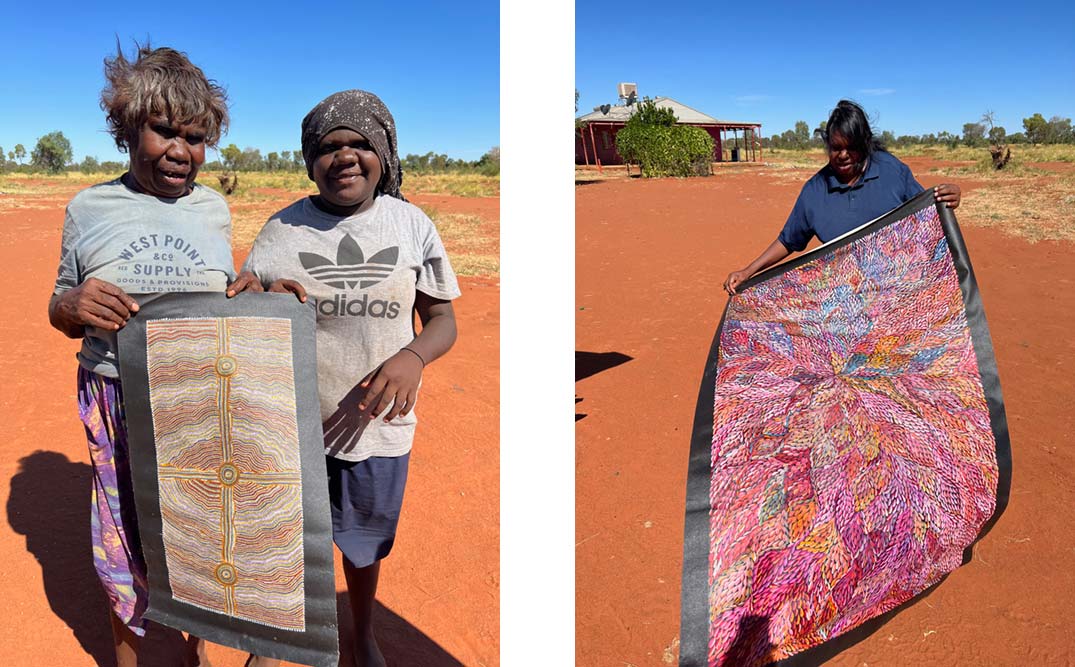 Left: Doreen and granddaughter Scharelle who insisted on being included in the photo! Right: Violet grappling with a large painting in the wind. 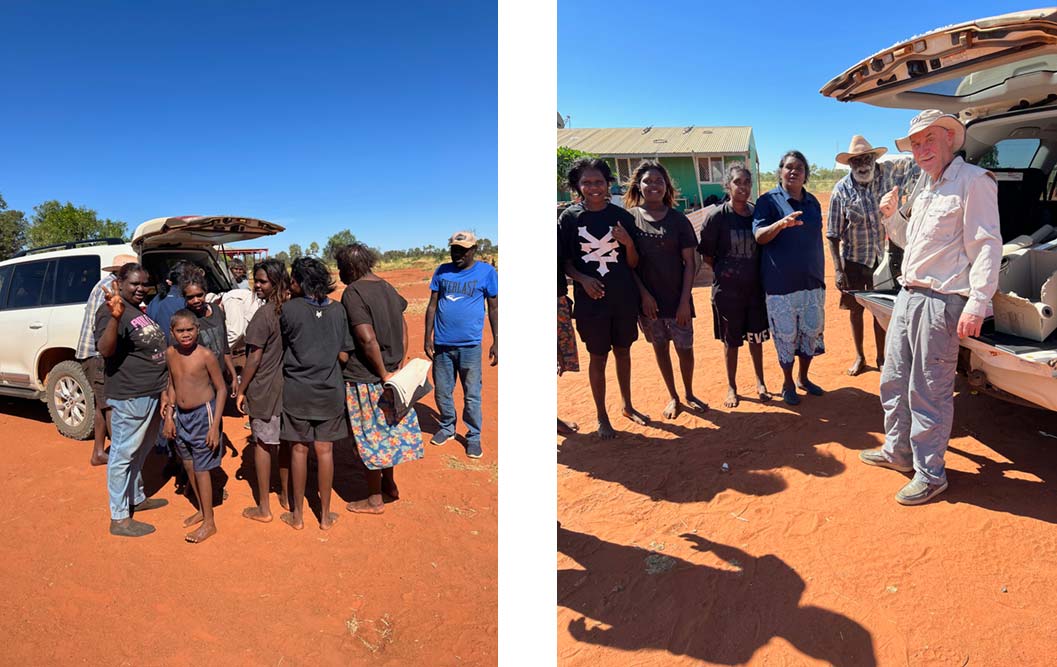 Left: Surrounded by the Payne's! Right: Me with my thumb pointing at Harold Payne. I told everyone the story of Harold who told me 30 years ago that he was going to make me a No 7 boomerang! And I'm still waiting!!

I left Kurrajong at 3.15pm for home. At 4.06 some 50km southbound I came across Barbara Weir and Teresa Purla n the side of the road with a flat tyre. Pulling up, I looked at them and then the tyre and thought, "Tim you've got a job ahead of you here!! Get your backside off your seat and get into it!". Then Teresa said that her man Chris was on his way with a bigger jack and some tools. They'd called him on the satellite phone. That sounded good to me - he's a good 15/16 years younger than me! Then along comes another vehicle with two big strong fellas on board. Brothers to Dennis Kunoth enroute to his funeral the following day. Barb knew them well. Then a rental car pulled up with 4 middle aged men. I was 'excused' and with a 2 hour drive ahead of me I headed off. I left my fold up chair with Barbara to watch over the tyre change like the Queen of Utopia!!

The 'Queen of Utopia' Barbara Weir and daughter Teresa.